“I went running down and he was about 200 feet away,” McDonald said. “I was shocked to see him stuck in a trap. He was trying to get out of it and chewing on his leg.

“I finally got it open, it took me about 10 minutes. His paw immediately swelled. He limped on it and hopped down. It was so upsetting. He was whimpering and scared.”

The 2013 incident is one of many highlighted by a recently released interactive map released by TrapFree New Mexico, a coalition of 14 advocacy groups that oppose trapping on public lands, which pinpoints animal trap encounters by domestic pets and other non-target creatures in 22 counties across New Mexico.

The map shows seven incidents in the Alamogordo-Mescalero-Lincoln County area, three near Farmington, one near Carlsbad and eight in the Las Cruces area.

McDonald said a game official who checked the trap that injured Jasper six years ago told her the trapper later was fined $40, because he had not checked the trap within the 24-hour period required. But the officer also warned that she could have been fined, if she had removed the trap, and that she should have kept Jasper on a leash, she said.

“This map highlights the reality of trapping: it is indiscriminate, cruel, and has a major, negative impact on people and animals throughout New Mexico.”

A dog must be on a leash in developed campgrounds or recreation sites, said Lincoln National Forest public information officer Laura Rabon Monday.

“They must be under the control of the owner with commands,” he said. “If they don’t obey commands and run at large, they must be leashed.”

Trapping for fur bearing animals is allowed throughout the national forest, except for beavers, said Public Information Officer James Pittman with New Mexico Game and Fish.

A ban of traps on public land in New Mexico is long overdue, McDonald said.

The strangulation death of a dog named Roxy at Santa Cruz Lake in November 2018 renewed efforts to ban traps on public lands and brought together the TrapFree New Mexico coalition.

State Reps. Matthew McQueen (D-Galisteo) and Bobby Gonzales (D-Taos) sponsored a bill to outlaw commercial trapping on public land called “Roxy’s Law” in honor of the 8-year-old heeler mix that died on a recreation area of the Bureau of Land Management.

In 2019, “Roxy’s Law” passed through two House committees, but did not receive a vote on the House floor. The bill won’t be introduced during the 2020 short session, but will likely be reintroduced in 2021, according to Chris Smith with WildEarth Guardians, a member of the coalition.

Earlier this month, conservation and animal protection groups as part of the TrapFree New Mexico coalition released a map detailing trapping incidents around the state.

“The map shows trapping’s toll all across New Mexico, demonstrating that trapping is an ongoing problem for companion animals, endangered species, and law enforcement alike, according to information from the coalition,” a statement from the coalition noted.

The New Mexico Department of Game and Fish is considering rule changes, according to information from the department. The proposal includes closing less than 1 percent of public lands to most traps on land, some technical requirements on how to set traps, mandatory trapper education and increased setbacks from trailheads, but not from trails or roads, according to TrapFree New Mexico and the Game and Fish department.

The proposal also calls for expanding year-round trapping seasons for raccoons and nutria, and increasing the time frame for a trapper to check on underwater traps.

The coalition characterized the suggested changes as “trivial,” contending they would do nothing to address the majority of the incidents documented on the map.

“This map highlights the reality of trapping: It is indiscriminate, cruel, and has a major, negative impact on people and animals throughout New Mexico,” said Mikaila Wireman, who created the map for WildEarth Guardians.

“The negligible changes proposed by the Department of Game and Fish do nothing to address the real problems that trapping imposes. Until traps and snares are banned on all public lands, devastating confrontations with traps will carry on and this map will only continue to grow.” 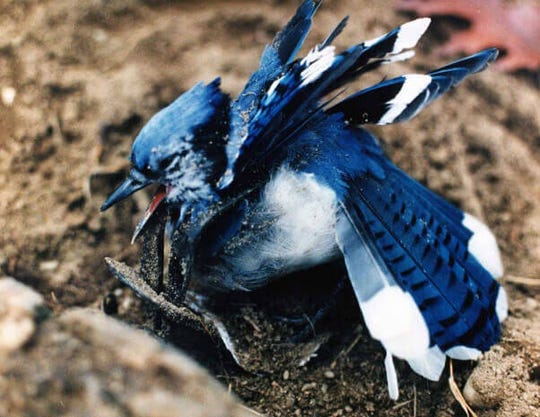 Another view of traps

Ranchers in Lincoln County annually pay toward a predator control fund that is included in the county’s budget under external agency requests. In 2019-2020 the U.S. Department of Agriculture’s predator control program budget request was $34,660, which is supplemented by a per head of cattle tax paid by ranchers of 75 cents.

“Predator management is key to the success of any livestock operation and most agricultural operations,” said Caren Cowan, director of the New Mexico Cattle Growers Association. “It’s a good method, because it targets the offending predators. It is safe to be done, contrary to what others might say.

“Trappers have to be licensed and many of the incidents we hear about are from nonlicensed trappers. Trappers get a black eye from those kind of people and 99 percent of the trappers obey the laws. They do trapper education. It is  just a part of the hunting, fishing, ranching and agricultural culture of New Mexico.”

“Land in New Mexico is comingled and checker-boarded. Sometimes pastures may contain at least two statuses of land, federal and private or private and state. But most ranches are made up of all three classes of lands,” she said. “So when you stop it on one class of land, you are causing serious damage to the landowner, who can no longer protect his livestock.”

Chance Thedford, president of the New Mexico Trappers Association, contended what is described on the map is an inaccurate account of incidents throughout the state.

“It’s statistically proven that the chance of a hiker or their pet being injured is more likely to come by a snake bite rather than a legally placed trap,” Thedford said.

“Ranchers in New Mexico have never been able to trap wolves on private or public land,” he said. “A continued false attack on trapping has resulted in inaccurate/false reporting by local news outlets due to lack of knowledge and education on the subject.”

The New Mexico Trappers Association strongly advocates for and promotes wise use of trapping and trapping education, Thedford said, adding that the group’s motto is “Promoting Wise Use.”

Members were angered about the death of Roxy and outraged at the decision not to pursue charges against the individual identified as the illegal trapper, he said, adding that the incident left a black eye on the trapping community.

“We continue to see the blatant disregard for a long existing law that requires pets to be restrained on public land,” he said. Instead, those lawfully trapping have been attacked, he contended.

TrapFree officials disagree, stating that trapping conflicts with the state’s valuable outdoor recreation industry and that scientific studies show that trapping and lethally removing carnivore species, like coyotes often exacerbate conflicts such as those with livestock.

They referenced “Using Coyotes to Protect Livestock. Wait What?” from the Oregon Small Farm News.

“The true toll that trapping takes on native wildlife is difficult to know. Reporting requirements exist for some species, but not for often-trapped so-called ‘unprotected furbearers’ like coyotes and skunks,” according to the information supplied by TrapFree New Mexico.

Read this article in the Ruidoso News »