On the face of it, the announcement last month the New Mexico Game and Fish Department is considering banning the use of poison, as well as traps and snares in four high-use areas and at hiking trailheads, sounded good.

Because after all, that’s what smoke and mirrors is supposed to do – hide ugly reality.

And the ugly reality is in New Mexico, it is – and will continue to be under the proposed changes – legal to litter public lands with spring-loaded steel-jaw traps and snares, including along trails and roads and ½ mile from picnic areas, rest areas and campgrounds. There will continue to be, as Game and Fish proudly announces in its 2019-20 New Mexico Hunting Rules & Info booklet, “no bag limit on any protected furbearer” (raccoons, badgers, weasels, foxes, ringtails, bobcats, muskrats, beavers and nutria). No license for New Mexicans to set out traps for coyotes or skunks, classified as unprotected furbearers. And while it will be clarified that it is against the law to take mink, river otter, black-footed ferret, coatimundi and American marten, try telling that to a leg-hold or body-gripping trap or wire snare.

Because traps are as indiscriminate as they are brutal. Anything that steps in them is fair game. And for some unimaginable reason, Gov. Michelle Lujan Grisham’s Game commissioners want to keep it that way. 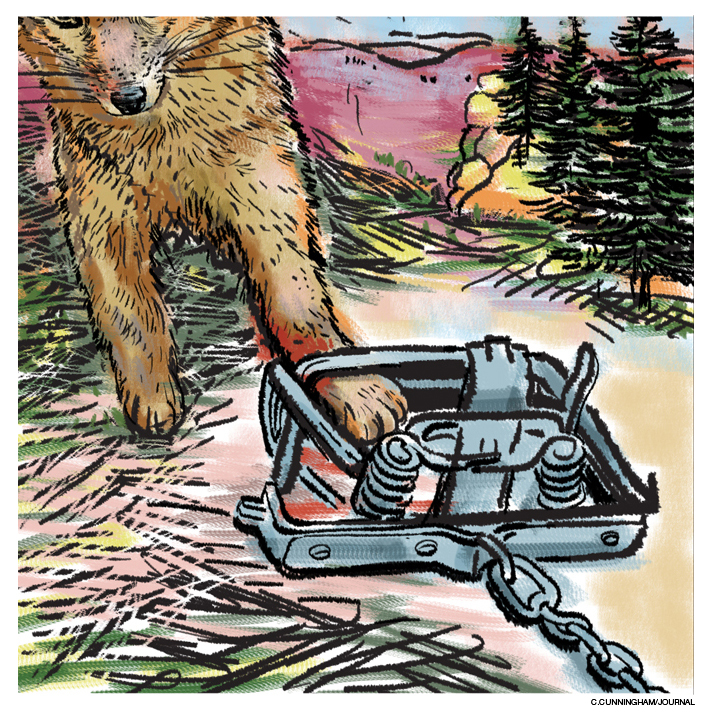 Weigh In On This Problem

N.M. Game and Fish is taking public comments on its proposed changes to trapping regulations. Email .

State law does not mandate trap locations be marked, signed or for any warnings to be present. Presumably because anything can, and does, step into a trap, there are and will continue to be no penalties for unintentionally trapping non-target species, including endangered species, protected species, domestic animals, pets, humans or livestock. Heck, there’s not even a gross receipts tax levied on the fur and pelts sold by trappers.

And while there will be required trapper training, and traps are to be clearly marked with the trapper’s information, there are too many cases of pets caught in unmarked/illegally placed devices – like the snare that killed family dog Roxy at Santa Cruz Lake last year.

(Our state lawmakers are not much better than the Game Commission; “Roxy’s Law,” an anti-trapping measure introduced by state Rep. Matthew McQueen, D-Galisteo, Rep. Bobby Gonzales, D-Ranchos De Taos, and Rep. Christine Chandler, D-Los Alamos, didn’t even make it to the House floor this spring.)

And so New Mexico, one of the last two states to ban the bloodsport of cockfighting, does next to nothing while others embrace moral and fiscal sense. This month, California banned fur trapping for animal pelts, making it the first state to outlaw commercial or recreational trapping on both public and private lands. The law’s sponsor, Assemblywoman Lorena Gonzalez, says the practice is “especially cruel” and “just unnecessary and costly,” adding that her state’s roughly six dozen trappers cannot afford to pay the full cost of implementing and regulating their industry.

Arizona, Colorado, Florida, Massachusetts, New Jersey, Rhode Island and Washington have banned or restricted the use of leg-hold traps, while New Mexico caters to a vocal minority.

Jessica Johnson, chief legislative officer for Animal Protection of New Mexico, says “the State Game Commission (should) respect the will of the vast majority of New Mexicans by getting traps and snares off our public land.” Email comments on the proposed changes are being accepted, public meetings are planned in October and November, and a vote is planned in January.

Trapping is a morally and fiscally expensive cruel anachronism whose time has come and gone. New Mexicans need to use the coming weeks to help the Game Commission understand that.

Read this Editorial in the Albuquerque Journal »