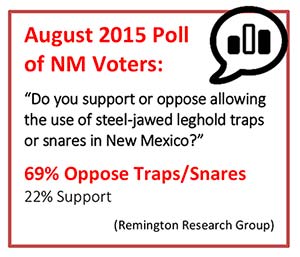 The Wildlife Protection & Public Safety Act bans the use of traps, snares, and poisons on New Mexico’s public lands—unless it meets a listed exception.

This is a reasonable solution that will protect wildlife, companion animals, and citizens enjoying New Mexico’s public lands from unnecessary and accidental suffering, injuries, and deaths—and better align the management of wildlife with modern conservation practices and New Mexico voters’ humane values—while still allowing certain key tools for ranchers and government agencies to protect public health and livestock. It will also help mitigate the emotional and financial strain of dealing with the loss or injury of an animal because of the jaws of a trap, a snare, or poisons.

EXCEPTIONS IN THE BILL:

Why restrict traps, snares and poisons on public lands? 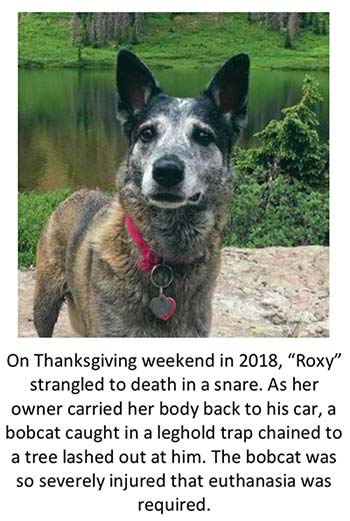 On Thanksgiving weekend in 2018, “Roxy” strangled to death in a snare. As her owner carried her body back to his car, a bobcat caught in a leghold trap chained to a tree lashed out at him. The bobcat was so severely injured that euthanasia was required.

They are indiscriminate and cause needless suffering. Because they are non-selective, non-targeted animals—including family cats and dogs, and endangered species—fall victim to traps, snares, and poisons. Captured animals often further injure themselves while thrashing or chewing off their own limb while trying to escape. Traps often go unchecked long enough that the animal starves, dies of exposure or dehydration, or is killed by another animal before being found. Toxic poisons such as sodium cyanide (used in M-44s) and Compound 1080 result in horrific and excruciating deaths within minutes or as long as 9 traumatic hours of cardiac failure, respiratory arrest, and severe prolonged convulsions leading to eventual death.

New Mexico’s tourism and outdoor recreation economy is damaged by the threat of traps, snares, and poisons on public land. According to the 2011 U.S. Fish & Wildlife Survey of Wildlife-associated Recreation, wildlife-watchers in New Mexico spent $327 million on their activities (increased since 2006) versus trappers spending only $3.5 million (reported in a 2013 NM Department of Game & Fish-commissioned analysis). The #NewMexicoTrue campaign could be destroyed if a tourist’s dog were injured or killed on our public lands.

Current regulations are inadequate and impossible to enforce. Outdoor recreationists and their companion animals have the right to enjoy lands off-trail or off-road without worrying about encountering traps and poisons. Traps have caught both on-leash and off-leash dogs while legally set, and illegally set traps often do not have the required identification information, so the violators are never found.

Traps are not necessary to manage carnivore species to protect livestock. The U.S. Dept. of Agriculture estimates that carnivores kill only 0.18% of the total U.S. cattle inventory and 4% of the sheep inventory. Many non-lethal methods—pens, sheds, visual deterrents, guard animals, and cage traps—are effective and widely available. Eight (8) other states ban leghold traps, 14 ban body-gripping traps, and 20 ban snares. Neighboring states Colorado and Arizona banned traps on public land in the mid-1990s, and they see less livestock depredation than New Mexico.

Trapping is market driven—the number of traps littering our lands increases with pelt price, not population levels. According to the Centers for Disease Control, National Academy of Sciences, World Health Organization, and numerous other scientific, public health and veterinary organizations, use of traps and poisons is unnecessary for disease control. 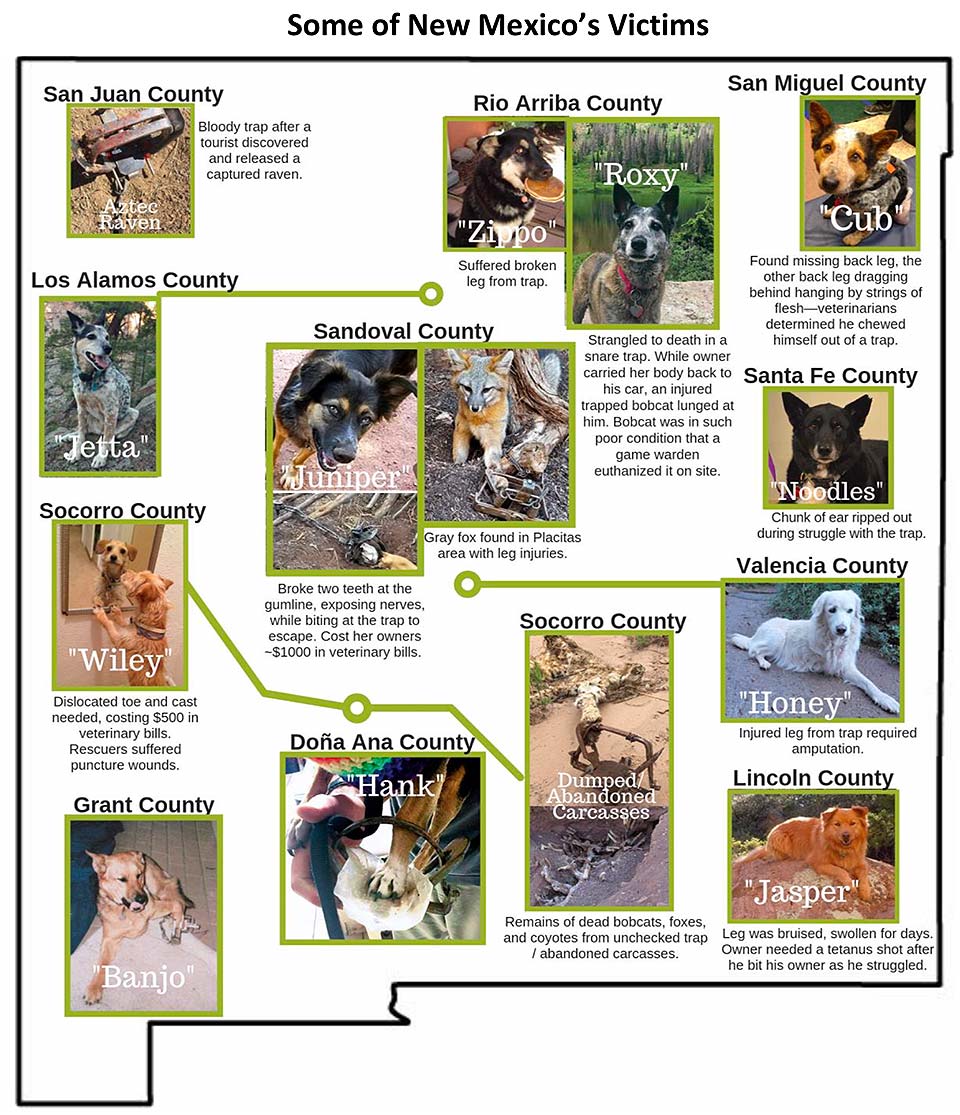