Las Cruces Sun-News: It is time for New Mexico trapping laws to catch up 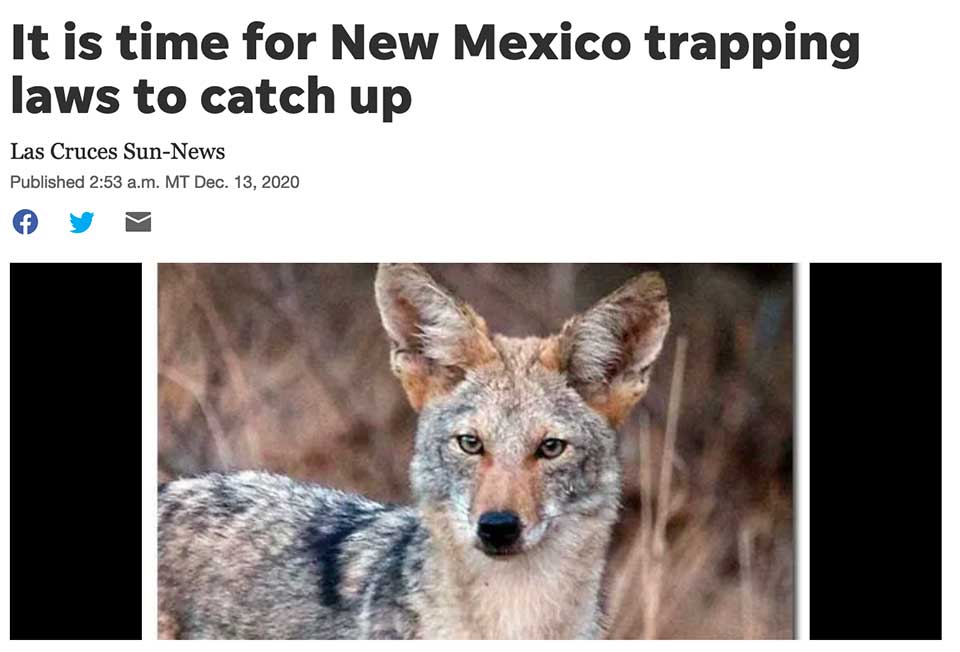 On a warm November morning, a man taking a stroll through the amazing trails south of Santa Teresa discovered a pile of some forty dumped animals. What he first thought were dead greyhounds turned out to be coyotes. They had been killed and skinned, and left with only a little fur on their legs. The carcasses were left to unceremoniously decay in the desert. Wounds on their paws indicated that this was the heinous work of trappers.

This gruesome scene is the common outcome of trapping, but is rarely witnessed by the public. Trapping is legal in New Mexico, and is widespread on public lands. A license only costs $20 through the Department of Game and Fish, but the real cost is paid by the public and by our ecosystems. Over the years, dozens of companion animals have been victims of traps on public lands. Coyotes are a common target, but a range of species, including bobcats, beavers, badgers and foxes are killed by the thousands every year so that a tiny group of New Mexicans can profit from taking away something we all love.

As a native New Mexican, I know that our state’s public lands have some of the most beautiful scenery and landscapes. They are also home to an incredibly diverse array of wildlife, and these species are all important parts of interconnected ecosystems. Healthy ecosystems clean our air, maintain our soil, regulate climate, and recycle nutrients that provide us with food. Animals such as coyotes and foxes keep rodent populations in check, protecting us all from disease and safeguarding crops. Beavers help to store precious water in the dry desert. Elusive bobcats are a treat for anyone to see while out on a hike.

The pile of coyotes found near Santa Teresa is a grim reminder that a handful of New Mexicans think that wildlife is there for them to slaughter for fur or for a sport. But maybe, this horror will prompt some of our state legislators to act in 2021. A small fraction of our state’s population holds our public lands hostage for nearly a third of the year with dangerous and deadly traps. Banning traps on public lands must be a priority this coming year.

With newly elected representation in southern New Mexico, there will be an opportunity to make all of our public lands safer for people and pets and more hospitable to wildlife. Banning traps on public lands is a common-sense solution that our neighbors in Arizona and Colorado made decades ago. It’s time for New Mexico to catch up. In 2019, New Mexico passed Senate Bill 76 banning coyote killing contests. The obvious next step to bring our wildlife and public lands policies into the 21st century is right in front of us. Our elected lawmakers should have an easy decision in the upcoming 60-day legislative session.

As a rural resident myself, I see that these public lands are home to the most beautiful sceneries that southern New Mexico has to offer. These lands must not be home to dump sites and animals suffering and left to rot in the desert. Our elected lawmakers must recognize the change we need in order to ensure that this remains the Land of Enchantment.

To learn more about the effort to get cruel, indiscriminate traps off of public lands, please visit trapfreenm.org.

Read the Opinion in the Las Cruces Sun News »