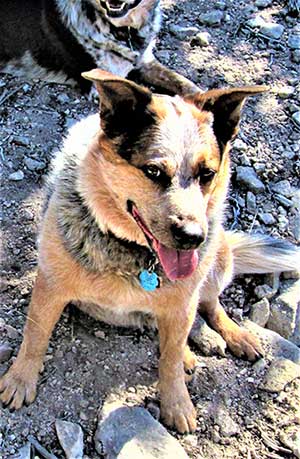 On Dec. 17, I was winding up my forest walk with my two dogs, Chaco and Cruzer, when, not 10 feet away, Cruzer began wailing and bellowing at the top of his lungs.

I thought perhaps something had stung or bitten him, buy it took only seconds to comprehend that he was caught in a leg trap. A few steps and I was with him, trying to console him as I attempted to spread the jaws of the traps with my hands. No luck. Finally, I figured out how to release the jaws enough for him to pull his leg out and he three-footed it away.

He allowed me to check him out and, although there was no blood, it was obviously tender to the touch. With great anger, I returned to the trap. The trap chain was held in place with a long pointed rebar piece driven into the soil. I found a second trap attached to the chain.

After this experience, I have absolutely no problem envisioning a poor coyote caught by his front leg in this very trap. If he danced around enough, he could have another leg ensnared. The victim is left with only three possible scenarios; stay there screaming until he dehydrates/starves to death or becomes the prey; chew the leg off and die of infection or starvation as a three-legged predator unable to catch food; or wait for the trapper to appear and shoot, but more likely, club him to death for a more saleable pelt.

We hike/snowshoe the Santa Fe National Forest three or four times a week. It is one of the few joys left during the COVID shutdown. What happened to Cruzer could easily happen to your dog or your child. Think very hard about that.

In 2019, House Bill 366 was sponsored by representatives McQueen, Chandler and Gonzales, and named “Roxy’s Law” for the family companion that sadly died in a snare trap, despite the owner’s efforts to free her. Her bill, like herself, died when time ran out and the session ended. The effort will be reprised.

I will be asking our representative, Joseph Sanchez, to sponsor or co-sponsor the renewed legislation for the coming session. If, as suggested, legislators are restricted to introducing only five bills each this session, I hope that one of them will be to outlaw trapping on public lands.

I have lived in New Mexico for the past 45 years. For a good share of my almost 80 years, I would say I was an “outdoorsman,” and greatly enjoyed my days of fishing and hunting. Never would I have ever participated in the trapping of an animal that might die a long and lonely death in excruciating pain. That is not the nature of any true outdoorsman.

Please, I, along with limping Cruzer and his partner, a semi-traumatized Chaco, and their mom implore you to act now.

Don’t allow 1,929 trappers to kill, maim and torture as many of the magnificent free animals that roam our public lands in New Mexico as they can for a paltry $20 bill. Support the passage of Roxy’s Law.

Cruzer, Chaco and all the other family members/pets, along with any unsuspecting children, will thank you for your courage and caring.

Read the Guest Column in the Albuquerque Journal »