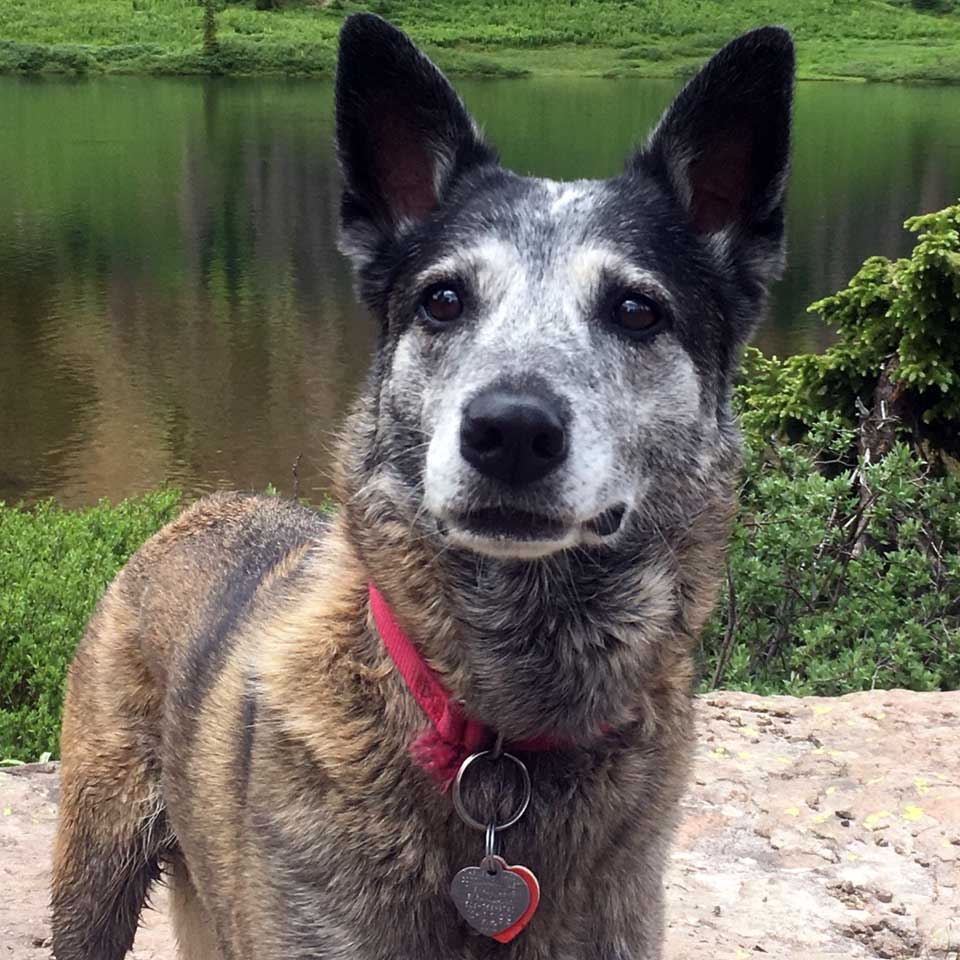 Roxy, an 8-year-old heeler mix, died in 2018 after being strangled by a snare at Santa Cruz Lake Recreation Area.

A Chimayó man accused of setting a snare trap that caused the death of a dog named Roxy, which sparked a law outlawing trapping on public lands, has been found not guilty on all charges related to the 2018 incident.

“It’s a sense of relief, obviously,” Marty Cordova said in a phone interview Thursday. “It’s been about three years I’ve had this burden on my shoulders. It feels really good to get this behind me.”

A jury in District Court in Santa Fe deliberated for about six hours over two days before finding Cordova not guilty Wednesday on all counts, defense attorney Yvonne Quintana said in a phone interview Thursday.

Cordova was charged with multiple counts of violating state laws regarding trapping fur-bearing animals, including trapping within 25 yards of a public road, failing to have identifying information on his traps and failing to check his traps daily.

Cordova, 44, found himself in the middle of a heated controversy over wildlife management and originally faced more than 30 criminal counts after Roxy — an 8-year-old heeler mix owned by Dave Clark of Española — was caught in a snare trap near Santa Cruz Lake.

The case subsequently spurred the passage of a new law — the Wildlife Conservation and Public Safety Act, also called Roxy’s Law, which takes effect in April. It outlaws trapping on public lands.

But he told The New Mexican in 2019 he’d been hiking with Roxy near the lake, a reservoir about 15 miles east of Española, when the dog was caught in the trap.

“She was behind me and running to catch up,” Clark said. “I heard this sound and I turned around. She’d been caught in a snare trap. I couldn’t figure how to get it off. She was strangled while I was trying to remove it.”

As he was carrying his dog back to his truck, he said he heard another noise and found a bobcat caught in another trap. A game warden later euthanized the bobcat, he said.

According to an affidavit for a search warrant, a state Game and Fish Officer said that after removing the trap, he noticed there was no identification on the device, as required by state law. Surveillance cameras eventually captured images of Cordova checking and removing traps in the area.

After identifying him from surveillance camera images, Game and Fish officers served a search warrant on Cordova’s residence, resulting in the seizure of multiple snares and foothold traps that were not properly marked, according to the affidavit.

Quintana said she got the case dismissed at the Magistrate Court level based on challenges to the evidence, but the First Judicial District Attorney’s office filed the case in District Court as an appeal.

Cordova had faced 34 misdemeanor counts of violating laws regarding the trapping of fur-bearers in the Magistrate Court case, court records show.

The number was reduced to 23 counts when it was refiled in District Court, and it had been reduced to 10 counts by the time Cordova’s trial started Monday after more than a dozen counts were dismissed based on problems with evidence.

“It’s unfortunate the Game Department keeps doing this to individuals,” Cordova said. “I was fortunate I had the means to be able to defend myself, but that’s not common with many individuals that get accused of such things, and they have to take a lesser plea or plead guilty.”

“I think it is the right outcome,” Quintana said. “The case was overcharged, and the state and [Game and Fish Department] officers really did a disservice in regards to losing evidence.”

Game and Fish deleted thousands of photographs related to the case, Quintana said, adding other pieces of evidence — such as parts of the trap that snared Roxy — were lost.

While many of the counts against Cordova accused him of not putting identifying information on his traps, Quintana said the state didn’t collect a single trap from the field as evidence and only had traps they’d taken from Cordova’s home.

Quintana also said the dog was not on a leash as required in the Santa Cruz recreation area.

“So while the traps may have been at fault for the loss of the dog, there was also that issue that if the dog had been controlled with a leash, the tragic loss of the domestic pet may never have occurred,” she said.

District Attorney Mary Carmack-Altwies disputed Quintana’s contention that the case was overcharged and said some of the evidence had been lost by the Bureau of Land Management during that agency’s investigation.

Carmack-Altwies wrote some of the unmarked traps allegedly belonging to Cordova “were left in the field where Game Cameras were set by BLM and Game and Fish for them to observe and try to identify who was setting these traps.

“However, all traps collected at the Defendant’s home … were presented,” she wrote. “There were 7 foothold traps and 3 snares collected … and none of them had tags at the time. One snare that could have been collected was destroyed because they had to cut it off of Roxy (the dead dog) to remove her body from the scene.”

The District Attorney wrote she felt she had the evidence to prove the charges when the case went to trial, but state District Court Judge Mary Marlowe Sommer’s rulings “immediately before and during trial” limited what the jury was able to hear and see.

“The State fought hard for accountability and what the jury did see and hear was heartbreaking testimony and evidence about how Roxy and her owner suffered,” Carmack-Altwies wrote.

Quintana said the case was one of the toughest she’s tried when it came to choosing a jury because of the strong opinions many potential jurors held regarding trapping and animal rights.

Three jury panels had to be vetted before the parties were able to agree on 14 jurors — 12, plus two alternates — to hear the case, she said.

“It was very inflammatory because the dog got killed,” she said, adding potential jurors seemed more “stirred up” about the case than they were about a murder trial for which a jury also was being chosen.

While she’s no fan of trapping, Quintana said the law passed as a result of Roxy’s death “changes a way of life in New Mexico that is traditional, historic and has been practiced for hundreds of years.”

Cordova — a utility manager at Los Alamos National Laboratory, where he’s worked for the past 21 years — said he has a small farm in Chimayó where coyotes and other predators sometimes kill his chickens, and he traps them as a form of population control.

He said activists who pushed for the passage of Roxy’s Law used him to accomplish something that had been on their agenda for some time.

“They used me as a scapegoat to say, ‘Look at how bad sportsmen are, and look at the results of trapping,’ ” he said. “They used my name to pass a law they’d been trying to pass for year and years and they continue to slander my name.

“They were able to convince legislators trapping is bad,” Cordova said. “Trapping is not bad; it’s a means of conservation, just like hunting deer or fishing. But you mention the word trapping or anything, and they hate that. But when Fido or your cat gets stolen from your back yard by a coyote, then they want all the coyotes killed. Sportsmen keep that population in check, but most people don’t understand that and just view us as killers and inhumane, and that is not the case. That’s not who we are.”

Read this article in the Santa Fe New Mexican