New report details the many problems of traps on public lands

The economics of trapping, the number of species killed by trappers, and environmental harms are among topics covered by report

SANTA FE, NM—Today, WildEarth Guardians and members of the TrapFree New Mexico coalition released a detailed report that makes an in-depth case for banning traps on public lands. Touching on a wide array of topics, the report goes into detail on the economics of trapping versus other uses of public lands, common trap types and the injuries they cause, and the environmental impacts trapping may have on New Mexico. The report relies on data from the New Mexico Department of Game and Fish, fur auctions, and other scientific sources. 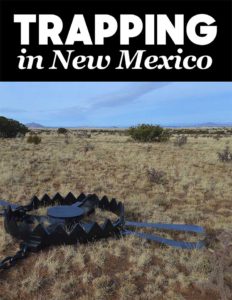 “Trapping is declining in profitability while simultaneously causing substantial economic, environmental, and emotional harm across the state,” said Mikaila Wireman, who helped write the report for WildEarth Guardians. “The people, pets, wildlife, and reputation of New Mexico stand to gain so much by ending this cruel and antiquated practice. Our report relies on solid, scientific research which demonstrates the multitude of reasons why public lands trapping should no longer have a place in New Mexico.”

Trapping is touted by some as a rural economic engine in New Mexico. However, data from local and regional fur auctions makes clear that for the vast majority of trappers, the activity likely generates little to no net income. The average New Mexico trapper who attempted to sell every pelt from the 2018-2019 trapping season grossed between $264 and $440. After the cost of traps, baits and lures, licenses, chains, stakes, catchpoles, knives, and fuel, net income is likely substantially lower, and possibly a loss.

It is not clear, in fact, that trapping is an activity undertaken more by rural New Mexicans compared to urban residents. Trapping license purchases are concentrated among buyers in urban areas, according to data provided by New Mexico Department of Game and Fish.

“Our hope is that this information lays bare some of the misleading arguments that trappers and their allies use to perpetuate this cruel hobby,” said Chris Smith, southern Rockies wildlife advocate for WildEarth Guardians. “There is a common refrain from trappers that their tools are humane, that they are doing ‘wildlife management,’ and that trapping is lucrative. After examination, those claims don’t really carry water.”

A section titled “Interfering with Nature” highlights some of the impacts that widescale killing of native wildlife can have on desert ecosystems. Another section of the report shares just a few stories from the many New Mexicans who have seen their dogs injured and killed in traps on public lands.

“Whether archaic traps ensnare, maim and kill domestic dogs or wild coyotes, the ultimate result is the same: injustice and unjustified cruelty,” said Michelle L. Lute, national carnivore conservation manager for Project Coyote, and who holds a PhD in wildlife management. “Trapping is not legitimate management. It’s a sad form of recreation that robs ecosystems of native wildlife and families of their companion animals and needs to be outlawed as are other forms of animal cruelty.”

“Roxy’s Law,” named after a dog who died in a neck snare on public lands, would ban recreational and commercial trapping on public lands across New Mexico. The bill passed through two state House committees in 2019 and is set to be introduced again in the 2021 legislative session.