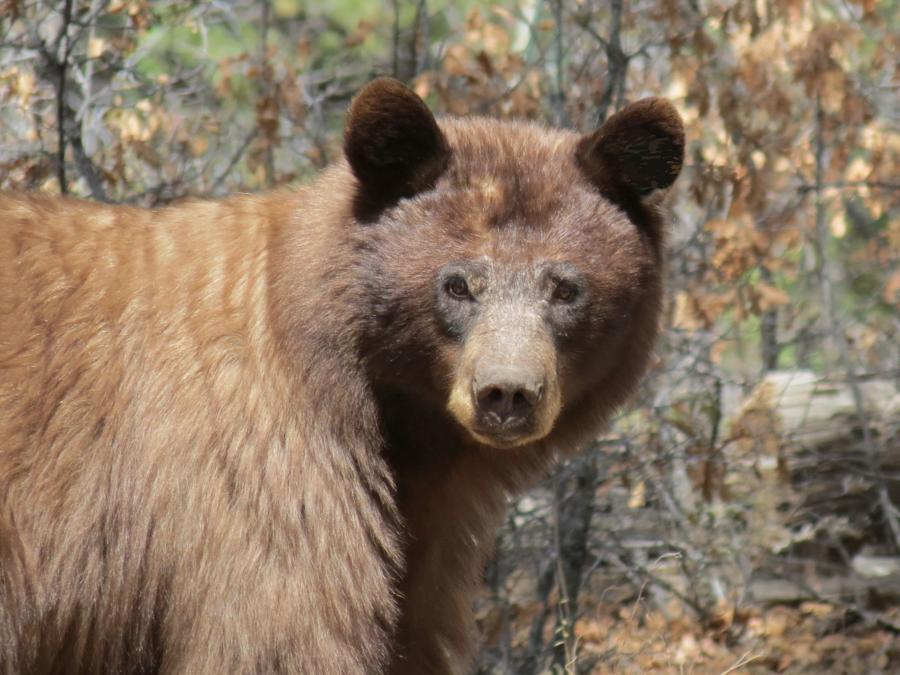 Courtesy BearWatch A BearWatch member who lives in the Manzano Mountains puts out a childs wading pool in the summers, and bears including this mother bear come to drink and bathe.

The New Mexico Department of Game and Fish has recently released its Final Adopted Bear Rule for the next five years, 2020-24, and the news is not good for New Mexico’s bears or for those of us who had hoped for some reasonable conservation for this species.

BearWatch did its homework to provide input for the rule-making by analyzing past harvest statistics: the number of bears killed by hunters per year, ages of harvested female and male bears, hunter success rates, and a multitude of other pertinent facts.

BearWatch met with six of Gov. Lujan Grisham’s new game commissioners for two-hour meetings held at their convenience in different locations in the state. We met to express our concern about the past eight years of the department’s mismanagement in regard to the over-harvest of New Mexico’s bears, especially female bears, and to suggest remedies that could be incorporated into the new Bear Rule.

The yearly statewide harvest limits have been so high – 804 total; 40% or 318 females – that they were never reached, which meant that there were no limits or management in place. Unfortunately, the commissioners chose to disregard biological science and harvest stats, and made no change to the faux “limits.”

BearWatch’s research showed an alarming statistic: the average age of killed female bears, sows, is now 6.5 years, or at the threshold of a red-line age 6 recognized by BearWatch’s bear biologist experts for maintaining the population. Since New Mexico’s sows don’t have their first cub until around 5.7 years old and reproduce only every two years afterward, if the average killed sow is less than approximately 6 years old, the population cannot reproduce itself. This is a major concern and is being ignored by the commission in the new Bear Rule with the statewide annual sow harvest limit set at an outrageous 318, triple what it should be.

As BearWatch predicted, when hunt limits were doubled during the past eight years, you have a declining bear population, with hunters unable to find male bears, so they irresponsibly kill female bears – 2019 showed only a 10% hunter success rate. Female bears are the future reproducers and better management should be in place to protect them.

We also reported to the commissioners that for the past two years, when mother bears were killed by cars, etc., and there were surviving cubs, those cubs were being destroyed by Game and Fish officers or being released too young on their own to starve or be predated upon by other wildlife. In the past, with the department’s help, Dr. (Kathleen) Ramsay’s bear cub rehabilitation foundation took care of as many as 30 cubs some summers. Game and Fish officers took no cubs to Ramsay this summer and only one last year. BearWatch finds this new practice unethical and callous.

Commissioners did change one rule for the next four years. They were concerned about the heat in the southern part of the state for bear hunters and their hounds, so they extended their hunt into late November and December. Of course, late-winter hunting is unfair to a bear since they are in torpor, an almost drugged state, and not up to a hound pursuit. Denned females with cubs can be disturbed, abandon their cubs and be killed. This makes for an unfair and unethical hunt. Commissioners were aware of this, but chose to give the hound-hunters their late November-December hunt, anyway.

Bears are the most intelligent wild species in North America. They are omnivores, with 90% of their diet consisting of vegetable matter. Unlike the grizzly, they are not considered to be an aggressive animal. The black bear is the logo of the New Mexico Department of Game and Fish. I often ask myself why New Mexico’s bears are treated with such disdain by the Game and Fish Department and this Game Commission.

It takes courage and leadership to reject bad advice that is being foisted on you by the same people who have mismanaged this species for the past eight years. Unfortunately, Gov. Michelle Lujan Grisham’s newly appointed commissioners were not up to that task and New Mexico’s black bear population is at risk because of them.

Read this Guest Column in the Albuquerque Journal