New Mexicans are warned of gruesome sights and danger while on public lands over the Thanksgiving holiday weekend—on the two-year anniversary of the death of “Roxy,” the dog who became the namesake for anti-trapping legislation

ALBUQUERQUE, N.M.— Today, multiple organizations comprising the TrapFree New Mexico coalition are issuing a grim warning to New Mexicans who plan on enjoying their public lands over the Thanksgiving holiday: Beware of trapping.

After reports over the course of eleven days that include the grisly discovery of piles of skinned coyote carcasses with leg-hold trap wounds and multiple dogs caught in leg-hold traps, enormous potential exists for New Mexicans to bear witness to wild and domestic animal cruelty and exploitation caused by trapping across the state—despite trapping rule changes enacted by the NM Department of Game & Fish earlier this year. As media coverage continues to shed light on these incidents, New Mexico’s image as an outdoor recreation destination suffers.

On November 14, 2020, as reported by The Farmington Daily Times, a husky named Ivy was hiking with her human James Stackhouse on state trust land near Lake Farmington and caught in a leg-hold trap. Unable to release Ivy on his own, Stackhouse called three friends and his wife to help him extract Ivy from the trap and transport her to a veterinarian. He is now afraid to walk his dog in the area that was once a treasured place to visit.

On November 20, 2020, as reported by KFOX14, Jose Talamas was on a morning stroll along a path off a main road outside Santa Teresa when he noticed a foul stench. Investigating further, he discovered multiple piles of dead skinned coyotes. Photos taken at the scene by Kevin Bixby of Southwest Environmental Center in Las Cruces, show dozens of dead skinned coyotes, in varying levels of decomposition, with several displaying typical leg-hold trap wounds on their paws—indicating that the carcasses were dumped by a trapper after removing the fur. When Bixby arrived on November 22 to look at the carcasses and take photos, individuals who appeared unaffiliated with any wildlife-related or law enforcement agency were removing evidence of the carcasses. 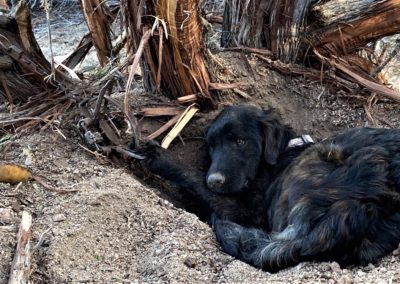 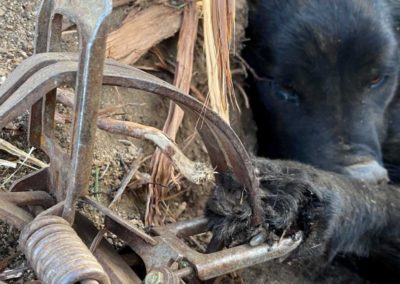 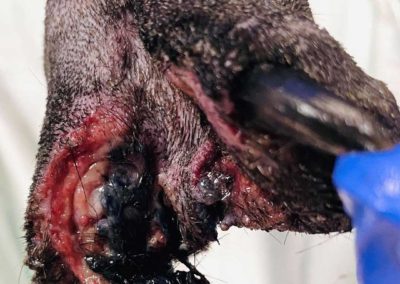 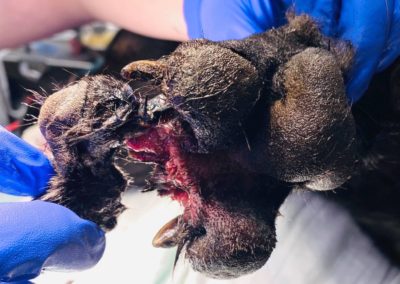 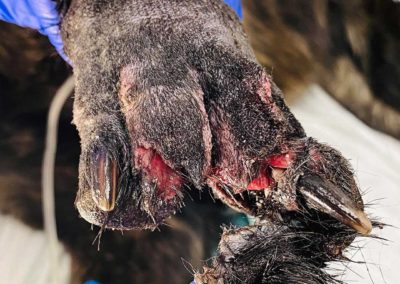 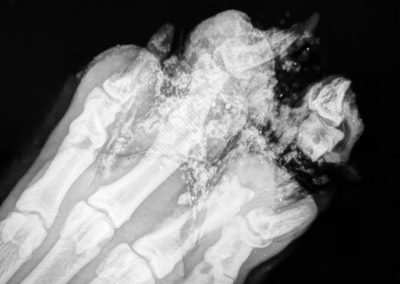 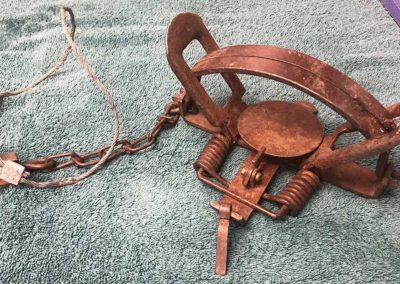 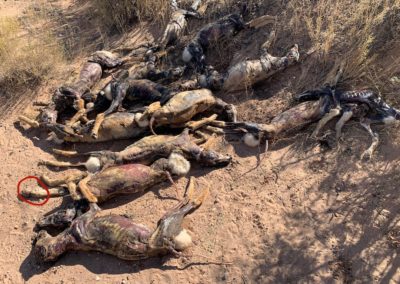 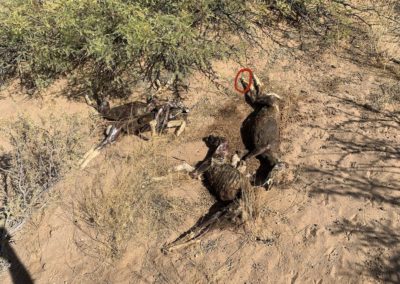 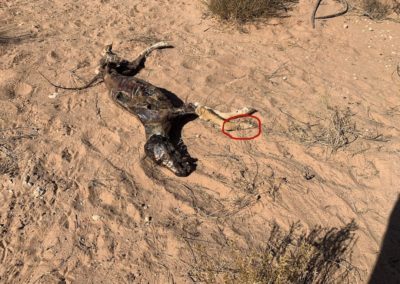 On the afternoon of November 21, 2020—in an incident for which details have only recently come to light—hikers in the remote mountains of Bureau of Land Management land in Santa Fe County were approximately one hour’s walk from the nearest road when they came upon a lone dog, dehydrated and injured in a leg-hold trap attached to a tree. Unable to release the dog, they left her food and were forced to leave the dog, return home, rally for help and organize a rescue. Returning the following morning with the help of rescue organization NMDOG, they were relieved to see the dog survived the night’s cold temperatures, freed the dog, placed her into a crate, and took turns carrying the crate down the mountain to see a veterinarian. NMDOG has since obtained legal custody of the dog and named her “Mahlia.” It is suspected based on the severity of her condition that Mahlia was in the leg-hold trap for several days. Mahlia received life-saving fluids, pain medication, bloodwork and x-rays, and is expected to recover after surgery to amputate several severely damaged toes.

One of the hikers who first discovered Mahlia, who wished to remain anonymous while the investigation of the incident is ongoing, offered this statement: “This situation is tragic, heartbreaking, and has had a profound effect on us. It took a lot of wonderful people to rescue and care for this sweet dog. We hope this makes everyone aware of how some people’s irresponsibility and ignorance is creating potentially deadly situations in our beautiful wilderness recreational area. We are so grateful to NMDOG, Trap Free NM, our volunteers, and Petroglyph Animal Hospital for assisting, and bringing awareness to the dangers of illegal trapping to pets and wildlife in New Mexico.”

“New Mexico is gifted with beautiful people, breathtaking landscapes, and magical places to explore,” said Angela Stell, founder and director of NMDOG. “We cannot continue to tolerate these abhorrent acts of cruelty to animals. It must stop—it is time.”

“New Mexico’s landscapes should not be home to the mass killing of innocent animals for money,” said Luciana Nino, organizer and advocate for WildEarth Guardians. “We must demand justice for our state’s beautiful native species. People should not have to witness this cruelty.”

“New Mexicans, and their friends and family, need to be aware that most public land allows traps and snares—and knowing how to release an animal and call a game warden is important. But most people I talk to about this issue would rather see these devices banned on all public lands, so they know that they can enjoy outdoor recreation safely and in peace,” said Kevin Bixby, executive director for Southwest Environmental Center.

These November 2020 trapping incidents are likely representative of a larger number of incidents that go unreported and follow other high profile stories in past years, including a fox injured in a trap found by a hiker outside Placitas; an injured raven in a trap found by a tourist near Aztec; and a dog who strangled to death in a neck snare over the 2018 Thanksgiving weekend, whose memory serves as the namesake for pending state legislation to ban traps, snares and poisons on public lands: Roxy’s Law. In 2019, the bill was sponsored by Rep. Matthew McQueen (D-50), Rep. Christine Chandler (D-43), and then-Representative Sen. Bobby Gonzales Jr. (D-6).

“Stepping into a leghold trap is a hideous fate for a coyote returning to her den and pups as much as it is for a well-loved pooch,” said Michael Robinson of the Center for Biological Diversity. “Trapping is not only cruel, it also harms natural ecosystems. It’s time for a law that bans trapping, keeps the wild alive and the public safe, and prevents the Land of Enchantment from becoming known as the land of entrapment.”

“These are just some of the countless and immeasurably cruel incidents in recent years where a New Mexican or a tourist has been faced with a dog or wildlife victim of a leg-hold trap or snare,” said Jessica Johnson, chief legislative officer for Animal Protection Voters. “Seeing the suffering and undertaking rescue and veterinary care is often a traumatic, heartbreaking, and expensive experience—and one that Roxy’s Law seeks to prevent.”