LAS CRUCES – On Nov. 20, a man on his morning walk discovered multiple piles of dead and skinned coyotes off a main road near Santa Teresa.

Kevin Bixby, executive director of the Southwest Environmental Center in Las Cruces, went to the site to check out the scene on Sunday.

“It was pretty gruesome,” Bixby said. “They were probably trapped in the area out in the desert.”

More than 30 coyotes had been dumped in four piles in the desert, their bodies all skinned and at varying levels of decomposition. Several had typical leg-hold trap wounds on their paws, indicating that this was the work of trappers who had dumped the bodies after removing the coyote’s fur. 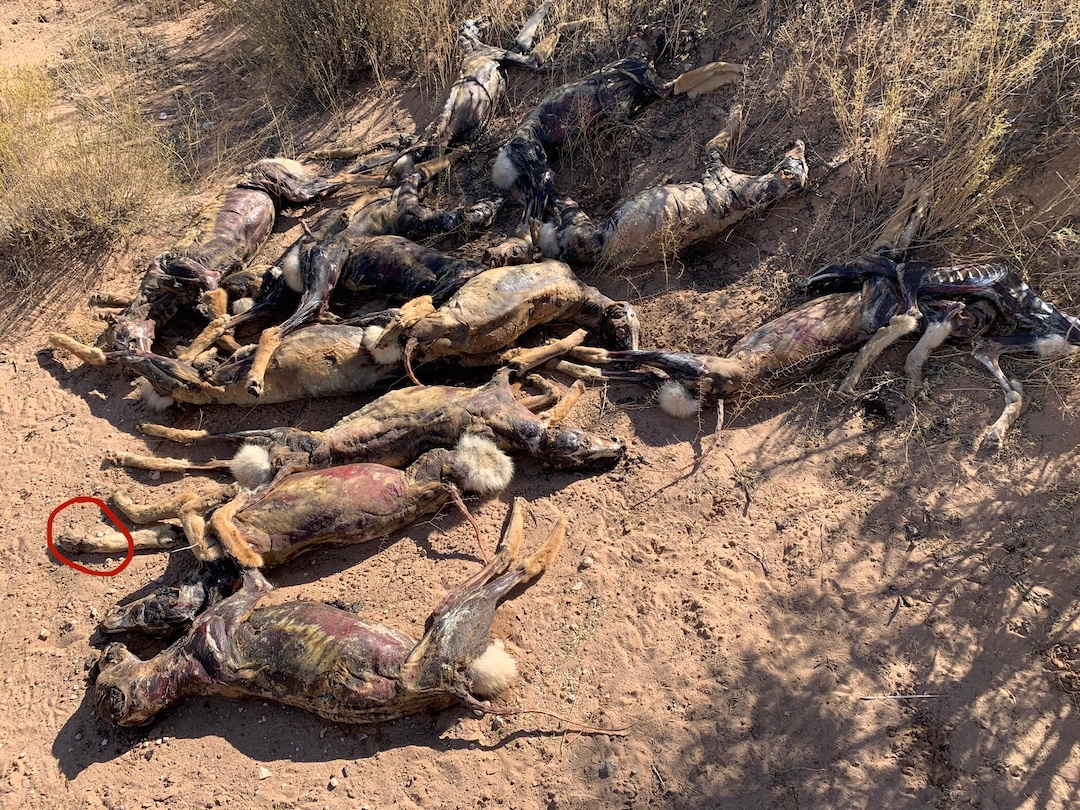 “I can trap coyotes all year round,” Bixby said. “But this time of year when it gets a little colder, the pelts are worth more money.”

According to state law, there isn’t a limit on trapping coyotes and New Mexico residents don’t need a hunting license to trap coyotes.

However, these piles of coyotes were found on private land according to Bixby. The private land owner could pursue trespassing charges.

Bixby said he doubted they were killed in a contest because that would likely mean the animals would be shot, which often spoils the furs. They also didn’t have wires around their jaws, which are typical of animals that have been killed in killing contests. Coyote-killing contests are banned in the state.

Bixby warned of the dangers that trapping poses.

“Every year, people out walking with their dogs, their dogs get caught,” Bixby said. “The act of trapping itself is horrible. It’s indiscriminate. They’re like landmines in the desert. They’re just waiting to catch anything that steps on them.”

Jessica Johnson, chief legislative officer for Animal Protection Voters, said this method of trapping, skinning and dumping seems quite common in the community.

“Having engaged in conversations with trappers … several of them have told me that what they do is they dump the bodies into ditches or hidden areas out on the land,” Johnson said. “They say that you should only dump maybe two or three at a time in one space to not create a big smell or visual appearance that would make it noticeable to someone.”

She said the most responsible way to dispose of these carcasses would be through a landfill or incineration, both of which cost money. Johnson explained that most trappers trap to make money, so these options take away from that profit.

When Bixby arrived at the scene, he ran into some men leaving the area who claimed they were hired to distribute the bodies. He suspected these men were not law enforcement or wildlife officials as one man was drinking a beer. He said it was  suspicious.

Bixby said he believes these men could potentially be connected to the dumping crime as the story was reported by KFOX14 two days prior, and they could have been tampering with the scene.

Read the article in the Las Cruces Sun-News