She has sat next to Anna Wintour at London Fashion Week and awarded Stella McCartney the Order of the British Empire.

Now Queen Elizabeth II is building on her fashion-forward reputation: The 93-year-old monarch will stop buying clothing made with real fur, the queen’s longtime designer and personal assistant wrote in a recently released memoir.

The queen’s confidante, Angela Kelly, wrote, “If Her Majesty is due to attend an engagement in particularly cold weather, from 2019 onward fake fur will be used to make sure she stays warm.”

The mink lining of a coat that Queen Elizabeth II wore to Slovakia in 2008 has been replaced with fake fur, according to Ms. Kelly’s memoir, “The Other Side of the Coin: The Queen, the Dresser and the Wardrobe.”

The move comes as a number of fashion labels such as Prada, Versace and Coach have opted to stop using real fur in their collections. 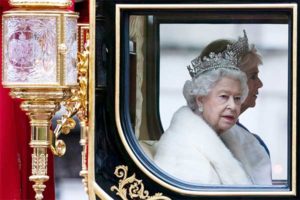 Buckingham Palace, in a statement issued to news media outlets based in the United Kingdom, confirmed the report — but with a caveat. It pointed out that the queen won’t be ridding her wardrobe of ceremonial robes and other official garments that are lined with fur, and that she could still wear them on occasion.

Humane groups commended the queen for her fashion choice, saying it reflected the mood of the British public toward the use of real fur.

“Our Head of State going fur-free sends a powerful message that fur is firmly out of fashion and does not belong with Brand Britain,” Claire Bass, executive director of Humane Society Internationals U.K. division, said in a statement.

Ms. Bass said the queen’s decision was a boon for the anti-fur movement.

“The U.K. banned fur farming almost two decades ago because it was deemed too cruel, now we must finish the job and ban fur sales too,” Ms. Bass said. “We are calling on the British government to follow Her Majesty’s example and make the U.K. the first country in the world to ban the sale of animal fur.”

The queen, who assumed the throne in 1952 after her father died, has often been photographed wearing fur over the years.

PETA, the animal rights group, also commended the queen for the move.

“The queen’s decision is in line with the many forward-thinking consumers, businesses and nations that are recognizing that innovative faux-fur fabrics are better for the environment and spare animals a miserable life and a bloody, painful death,” the group said.

PETA also renewed its call for the queen’s guard to discontinue its use of bearskin hats and replace them with fake fur.

However, the British Fur Trade Association said in a statement that it was “pleased that the queen will continue to wear fur garments contrary to the claims of certain groups.”

“Natural sustainable fur that is subject to high animal welfare standards is part of the solution to the problem of fast fashion whilst faux alternatives are made from plastics that unlike natural furs are polluting and do not biodegrade and is why people are choosing to wear the real thing,” said Nicholas Dunn-McAfee, public policy and engagement manager for the association.

Read the article in the New York Times »