Roxy – the beloved dog killed by a neck snare in 2018 while hiking with her family – may not have received justice in the recent trial of the trapper accused of setting that snare. But she was victorious in a far greater way. Her face and name became emblematic of the campaign to stop the recreational and destructive use of traps, snares and poisons on New Mexico’s public lands. And, in 2021, that work finally paid off when “Roxy’s Law” was signed into law.

Roxy’s death appalled and alarmed many New Mexicans. It was her story that topped off years of work by Animal Protection New Mexico and other animal advocates to ban traps, snares and poisons on public lands. But that campaign started decades ago – long before Roxy’s death. 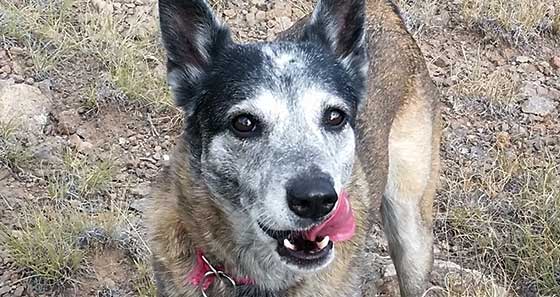 Advocates spent many years in the 2000s urging action by the state Game Commission, but to no avail. Turning to the New Mexico Legislature for a solution, the first bill introduced to ban traps, snares and poisons in New Mexico was in 2013.

When Roxy died in 2018, there had already been numerous well-publicized trapping horror stories in the news. And, after she died, dozens more stories were shared: more dogs and cats caught in leg-hold traps and strangled in neck snares, and more people outdoors discovering wildlife victims, as well: injured and emaciated foxes and bobcats, decaying bodies stuck in forgotten traps, and piles of skinned carcasses left by trappers after they took all the fur they could sell for profit.

By the time “Roxy’s Law” finally passed and was signed into law in spring of 2021, reports of roughly 150 terrifying incidents, illegal trapping citations and endangered species captured on public land had been collected. New Mexicans were saying “Enough!” And the Legislature agreed.

The public should still beware: The prohibition on traps, snares and poisons on public lands doesn’t take effect until April 1, 2022. We are in the midst of the last ever trapping season on public lands. Trapping season spans from Nov. 1 through March 31 – though some species can be trapped year-round.

Roxy was killed over a Thanksgiving weekend, so this holiday season, here are some things to know:

• Though it doesn’t guarantee safety for you or your companion animals, you can reduce your risk by staying on marked trails and keeping your animals on leash. This is often better for wildlife and habitat, as well.

• If you, a member of your party, or your animal is caught or injured by a trap, snare or poison, please report that incident online at trapfreenm.org or call the Animal Protection New Mexico cruelty hotline at 1-877-5-HUMANE (1-877-548-6263), and you can get help on relaying information to law enforcement, if applicable.

The terrible outcome in Roxy’s case – botched by investigators’ failure to properly handle evidence – means no one will be held accountable for setting the neck snare that killed her. Our hearts go out to the Clark family, as no one should have to watch their animal die so tragically before their eyes. But the law that is Roxy’s namesake will go on to protect thousands of animals from unspeakable suffering every year, a legacy much bigger than a single case or trial.

Read this article in the Albuquerque Journal