When tourists or their dogs step into traps, you can kiss new outdoor recreation industry goodbye

New Mexico wants the traveling public to think of the state as a destination for outdoor recreation. For those of us who hike, bike, fish, hunt, and golf, that seems pretty obvious. The tourism industry and economic developers are on board.

However, some really old thinking threatens these new livelihoods.

This month the state Economic Development Department announced grants to business incubators with the best programs to help budding outdoor businesses. EDD wants to develop at least one incubator that specializes in recreation startups.

The department made its announcement at an Outdoor Recreation Economic Conference in Silver City, where attendees gathered to talk about how to promote outdoor recreation, “eco and wildlife tourism,” and public-private partnerships. One of the conference speakers was Axie Navas, recently hired to lead the newly created Office of Outdoor Recreation.

And last week New Mexico joined 12 other states in signing the Outdoor Recreation Industry Confluence Accords, which upholds “the four pillars of conservation and stewardship, education and workforce training, economic development, and public health and wellness.”

One of the tenets is “conservation and stewardship of land, air, water, and wildlife and for enhanced public access to them.”

This is not just an aesthetic exercise. In all of these developments there is a firm emphasis on jobs and economic development. In other words, it’s OK to make money on outdoor recreation.

The industry (yes, it is an industry) brings in about $10 billion a year, which is about 10 percent of the state’s gross domestic product, and supports 100,000 jobs, according to my former newspaper co-worker Karl Moffatt, who blogs at outdoorsnm.com.

The same day the state was announcing its recreation incubator initiative, a runner found a trap about 15 feet from Old Santa Fe Trail on the outskirts of Santa Fe with a dead fox in it. Although trappers are required to check their devices daily, the fox had been dead at least a week, and it was trapped illegally out of season.

Next we hear that a judge let off the trapper whose neck snare strangled a dog this year at a state recreation area north of Española. Although the evidence was overwhelming and included selfies of the trapper and his kills, the state Game and Fish Department muffed its investigation, and the trapper’s lawyer took full advantage.

This doesn’t happen in Colorado or Arizona, where bans have been in place since the 1990s.

Every dog owner in the state knows Roxy. The name of the dog killed in a neck snare was attached to a bill called Roxy’s Law that would have outlawed traps, snares and poisons on public land. Despite two hearings in which dozens of people described injuries to their dogs or themselves, the bill died.

Then there’s the state Game Commission. We might have expected a change of attitude by appointees of the new administration, but no. The commission is proposing minimal changes: Closing just one half of one percent of the state’s public lands to most traps, increasing setbacks from trailheads but not from trails or roads, allowing year-round trapping of raccoons and nutria, and increasing check times for underwater traps.

According to surveys, nearly 70 percent of New Mexicans oppose any kind of trapping. Are any of our public servants listening? Apparently commissioners don’t care that you, your child or your dog can step into a trap, but the first time this happens to a tourist, and that tourist posts to social media, you can kiss our outdoor recreation industry goodbye.

Trappers argue that they would lose their livelihood and “way of life.” What if legislators and commissioners showed some faith in this new industry? Its success could mean these people could use their knowledge of the outdoors for a kinder, better livelihood. 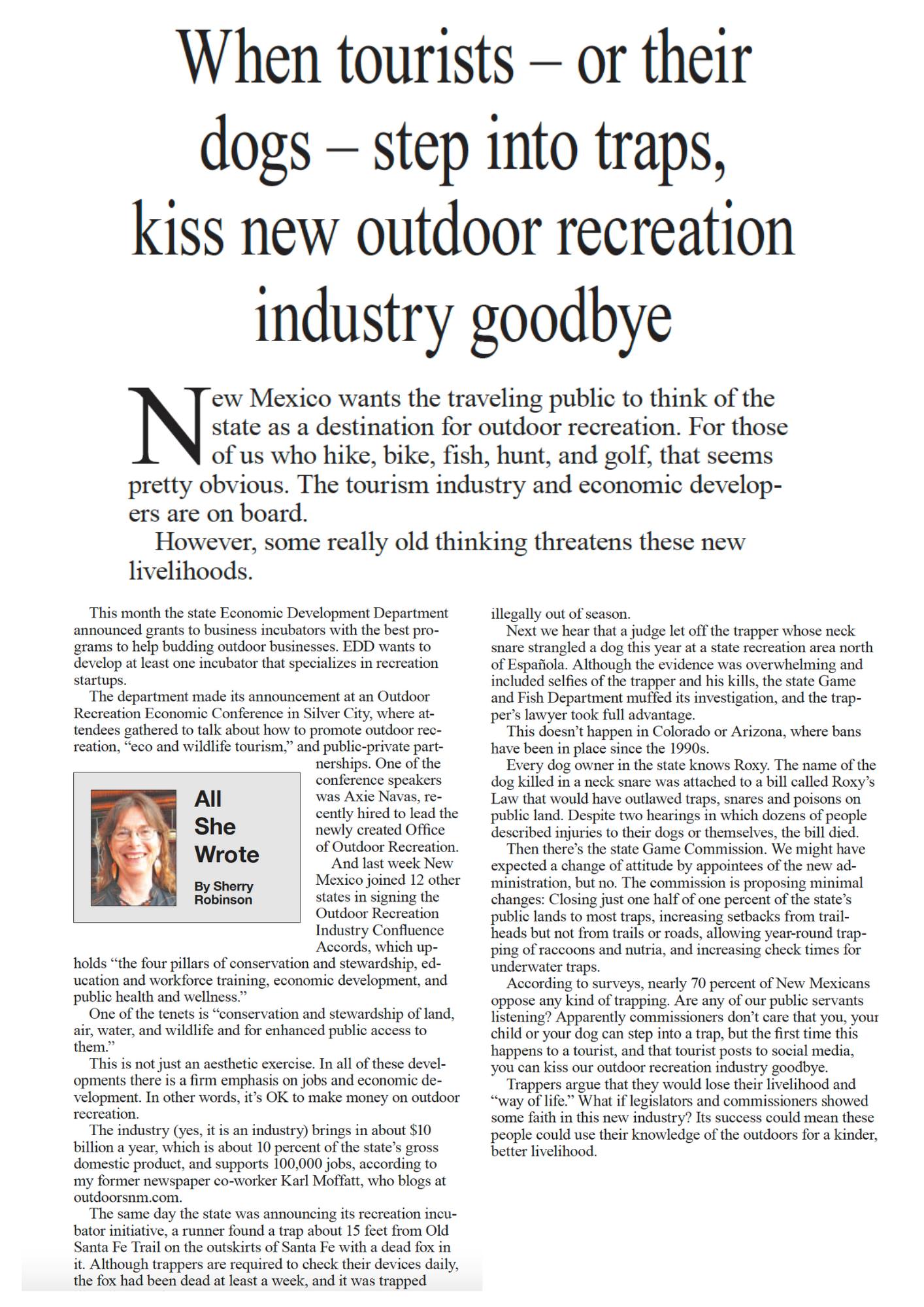 When tourists or their dogs step into traps, you can kiss new outdoor recreation industry goodbye