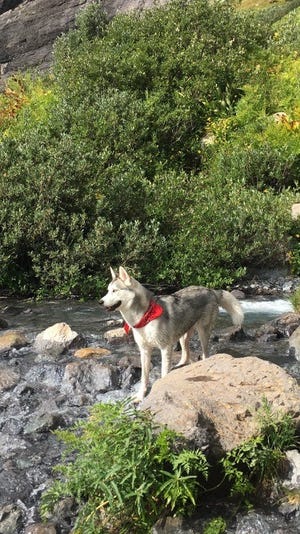 AZTEC — It isn’t unusual for James Stackhouse’s husky, Ivy, to disappear for a couple minutes while they are out hiking. She’s never out of sight for long and, at first, he didn’t think much about her absence as they were hiking near Lake Farmington on Nov. 14.

Stackhouse said he whistled for Ivy and heard her scream. The two-year-old dog had been attracted by a deer carcass and ended up trapped in a leg trap.

Trapping season began on Nov. 1 and people recreating should take extra care while hiking in areas that allow trapping. The laws require that traps be marked with a number or information to identify the trapper. The trapper must check the traps daily and the traps cannot be set within 75-feet of a trail or road.

Tristanna Stackhouse, a spokeswoman for New Mexico Department of Game and Fish, said the incident that resulted in Ivy being caught in the trap remains under investigation.

Stackhouse called his wife and three friends came to help him extract Ivy from the trap and rush her to a vet. He has since been concerned about trapping near Lake Farmington, which is a popular recreation site.

The area where Stackhouse was hiking between the lake and Foothills Drive includes a mixture of land ownership. Some of it is federal land managed by the Bureau of Land Management. Other portions belong to private property owners. Stackhouse was on state trust land when his dog was caught. State trust land requires a permit, such as a hunting license.

While Stackhouse now has a map of the different lands, he said the map is hard to read and it is hard to know when the BLM land ends and state trust land begins.

He said he would like to see the BLM, state and Farmington come together and create a no trapping zone near the lake.

“Now I’m afraid to walk the dog out there ever again,” he said.

Animal Protection Voters of New Mexico has been lobbying for years to end trapping on public lands. Chief Legislative Officer Jessica Johnson said as outdoor recreation becomes more common in New Mexico she anticipates there will be more incidents where dogs are caught in traps. And, she said, tourists may be distressed or disturbed if they see an animal caught in a trap.

“I really hope we don’t have to wait for a child to be caught,” she said.

This law that Animal Protection is lobbying for has been named Roxy’s Law, after a dog that was caught in a snare and strangled to death near Espanola.

“The trap doesn’t know the difference between a coyote and a husky,” she said.

Neighboring states like Colorado and Arizona have banned traps, snares and poisons on public lands. Johnson said if New Mexico develops a reputation for having traps near recreation areas the tourists may choose to visit similar landscapes in neighboring states.

Read the article in the Farmington Daily Times »