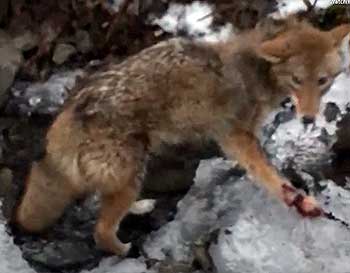 Santa Fe, NM — An anonymous good samaritan shared with Project Coyote a video showing the first-hand experience of encountering and rescuing a coyote ensnared in a leghold trap. This video comes at the same time the New Mexico legislature is considering Roxy’s Law, a bill that would ban cruel traps across the state’s public lands. Today, Dr. Michelle Lute will testify before the New Mexico Senate Conservation Committee to explain that trapping has no basis in science and cannot be justified as serving any legitimate wildlife management purpose.

We share this video from New York because animals in New Mexico experience the exact same torture when caught in the same cruel traps that are legal in both states and many others. The good samaritan encountered the coyote while hiking on public lands and discovered the unfortunate animal had both front legs caught in a trap. Fortunately, the hiker was able to free the animal from the leghold trap. During New Mexico’s current trapping season, this same traumatic experience has occurred at least seven times to animals and people hiking on public lands. In six cases, the hikers’ own dogs were cruelly trapped. In another incident, hikers encountered a lone dog struggling in a leghold trap.

“No one—neither residents nor visitors to the Land of Enchantment—should have to encounter the excruciating experience of a wild or companion animal maimed or killed by traps, snares or poisons,” said Michelle Lute, National Carnivore Conservation Manager for Project Coyote. “It’s 2021 and well past time to finally end the egregious and cruel practice of trapping.”

“There’s disconnect, for many people, about what large-scale private trapping means,” said Chris Smith, Southern Rockies Wildlife Advocate for WildEarth Guardians. “For every one of the 150,000 animals killed since 2008, there is a story like this one. A story of a desperate or maimed living being on its way to a cruel death.”

The good samaritan remains anonymous because, despite the clearly heroic act, rescuing a trapped animal and tampering with a trap is technically against the law in many states. Other laws governing trapping regulations, such as trap check durations and distance from roads and trails, are rarely if ever enforced.

Roxy’s Law has been introduced as Senate Bill 32. If the proposed legislation does not become law, the video will continue to be illustrative of how to save your dog or a wild animal from archaic and cruel traps. If successful, this important legislation will prevent future residents and visitors from the traumatic experience of encountering traps on New Mexico’s public lands and save countless animal lives. To read more about SB 32, click here.