A Toxic Relationship: Wildlife management is failing the animals and the people of NM

New Mexico’s wildlife is a unique natural asset to be enjoyed by all citizens forever. This is not some wolf-hugger’s fantasy; wildlife as a public trust is deeply rooted in common law and the judicial record of the United States. State wildlife managers are obligated to protect wildlife for the benefit of all, not just those who exploit it. Unfortunately, our governor-appointed game commissioners have failed in their public trust duties. For nearly eight years, the commission has acted with disregard for both public opinion and basic ecology. The commission has fostered a toxic relationship with the people and wildlife of New Mexico by ignoring public opinion, obstructing Mexican wolf recovery, expanding the slaughter of bears and cougars, promoting cruel trapping and failing to stop the obscene wildlife killing contests that continue across our state. The New Mexico game commission has abandoned ethical stewardship and delivered wildlife policy that is scientifically inept and morally bankrupt.

Despite a seven-year campaign by wildlife advocates to remove traps from public lands, the game commission continues to promote the trapping and killing of countless thousands of wild animals throughout the state. For just $20, trappers can buy a license to set as many traps and kill as many animals as they want in a manner so cruel it has been banned in over 100 countries. These traps are not marked, so anyone on public lands is at risk. Current rules allow some 500 trappers to hold the entire state hostage for a product we don’t need. Trappers kill our wildlife for personal profit, privatizing and vandalizing a public asset. This massive, indiscriminate killing is not management in any real sense and serves no constructive purpose in modern society. It’s a sad fact that our game commission is focused on continuing the exploitation of vulnerable wildlife.

Read the entire Guest Column in the Albuquerque Journal » 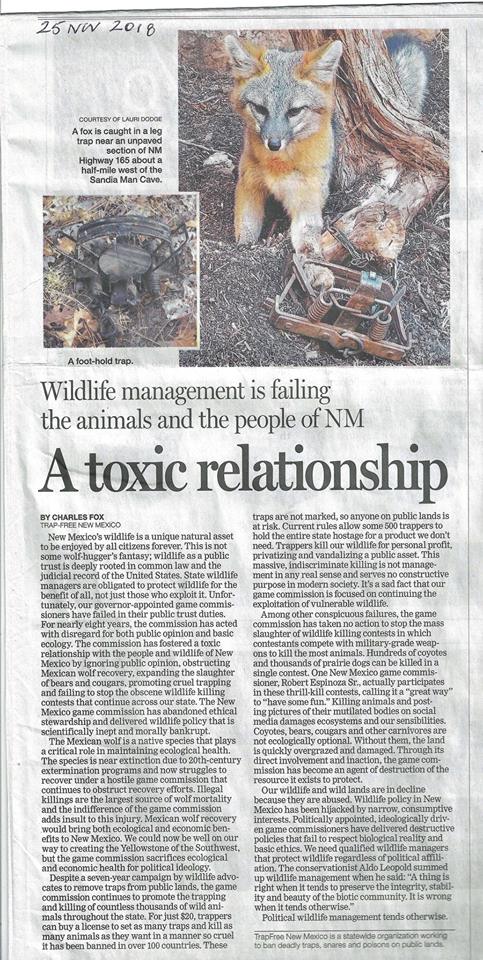