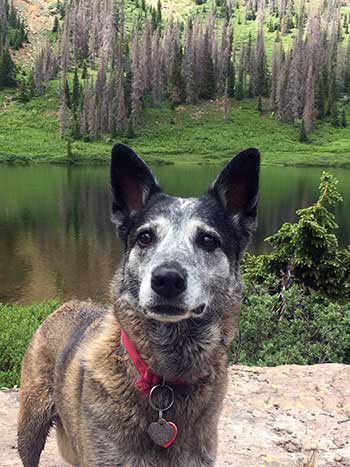 The incident happened at Santa Cruz Lake, a Bureau of Land Management recreation area in northern New Mexico. The dog, Roxy, was the cherished companion of Dave Clark and his wife Kathrina of Española. Mr. Clark and Roxy were finishing their hike and returning to his vehicle when he heard Roxy, behind him, make a strange sound. When he turned to see why, he saw that she was struggling in a neck snare trap.

Mr. Clark was unable to loosen the snare before Roxy strangled to death in the trap. Trapping is not allowed in this Recreation area and the snare had no trapper identification as required by law. But there are millions of acres of public land, where New Mexicans and tourists enjoy outdoor recreation, where snares and other dangerous traps may be legally set. A trap is only required to be 25 yards away from a road maintained annually with public funds or from a trail marked on an agency map.

Trappers seek to profit from the fur of trapped wildlife such as bobcats, foxes, coyotes and badgers. And indeed, Mr. Clark says that as he carried Roxy’s lifeless body back to his vehicle, he was startled by a bobcat, caught in a leg-hold trap, lashing out at him as he walked by. He said he was not hurt because the trap was chained to a juniper tree restraining the bobcat out of reach. But the experience added even more distress to an already terrible situation.

When law enforcement from the New Mexico Department of Game and Fish found the location, the bobcat was still present and alive but was in such terrible condition that the officer euthanized the bobcat. The investigation of this case is still ongoing.

This disturbing story caught the attention of the new State Land Commissioner, Stephanie Garcia Richard, who focused on the issue of trapping during her campaign.

“New Mexico’s future depends on healthy lands and sustainable ecosystems. Traps and snares on public land are dangerous, inhumane, environmentally destructive, and they have no place in a 21st Century economy,” said Garcia Richard. “That’s why, as State Land Commissioner, I’ve pledged to remove these outdated, dangerous devices from state trust lands.”

As Land Commissioner, Garcia Richard oversees 9 million acres of state trust land. But even after her office enacts the ban on state trust land, traps and snares will remain legal on more than three times as many public land acres in New Mexico, including those managed by the U.S. Forest Service and Bureau of Land Management, where the public enjoys outdoor recreation and which provide valuable wildlife habitat. For these lands, a legislative remedy is needed.

The TrapFree New Mexico coalition, to honor her memory, is also calling the legislation “Roxy’s Law.”

The 2018-2019 fur trapping season continues until March 15. There is no way to know where traps are hidden. Even NM Game and Fish, which sells the license to in-state trappers for $20, does not know the location or number of traps that are set. There is no bag limit on furbearing species and no way to know how many unintended animals are also harmed. TrapFree New Mexico urges hikers to report any trapping incidents at their website, www.trapfreenm.org.

In a separate incident in November, a dog named Kekoa, was rescued in Valencia County with such terrible injuries from a leghold trap that his hind leg had to be amputated. He is recovering slowly from the procedure which cost $3000.

“My heart just breaks hearing about this ordeal”, said Mary Katherine Ray volunteer Wildlife Chair for the Rio Grande Chapter of the Sierra Club, a coalition partner with TrapFree New Mexico. “These devices are simply not compatible with public access and I know I speak for all of us in the TrapFree NM coalition that we are more determined than ever that the archaic, brutal, cruel and exploitative practice of trapping end on our public lands.”

“Until public lands—the lands that New Mexicans prize for their beauty and accessibility—are free from dangerous and lethal traps, we have a huge issue in this state,” said Chris Smith, southern Rockies wildlife advocate for WildEarth Guardians. “These incidents continue to pile up and our leaders need to act.”

Mr. Clark adopted Roxy 8 years ago, and they were close companions. The two walked at least a couple of miles together almost every day. Mr. Clark attributes these walks to improving his health by lowering his weight and blood pressure after he retired. He now feels reluctant to go back to the place where this happened and even to walk anywhere on public land given that it is impossible to know where such traps are hidden.

He plans to testify at the State Legislature in support of “Roxy’s Law.”

Trapping on public lands is legal in New Mexico. No bag limits exist for furbearer species. The law does not require trap locations to be marked, signed, or for any warnings to be present. No gross receipts tax is levied on fur and pelts sold by trappers. No penalties exist for trappers who unintentionally trap non-target species including endangered species, protected species, domestic animals, pets, humans, or livestock. The new proposals leave all of these problems in place.

No database or official record is kept by any public entity and no requirement exists that trappers report when they have captured a dog in their traps. The pattern these incidents follow are usually similar; dogs screaming and frantically biting at the person desperately trying to rescue them. Veterinary and even human medical treatment along with associated expenses can result, as can long-lasting psychological trauma. Neither New Mexico Game and Fish nor trappers are liable for the damages that are caused by traps.

The almost singular excuse for the above-mentioned incidents is that trapping is necessary to control carnivore populations, but scientific studies do not support this assertion. In fact, scientific studies show that trapping and lethally removing carnivore species, like coyotes, often exacerbate conflicts such as those with livestock (see Using Coyotes to Protect Livestock. Wait. What?, Randy Comeleo, Oregon Small Farm News, Vol. XIII No. 2, p. 2, (Spring 2018)).