Many people are surprised to learn that fur trapping—the exploitative relic of the 1800s—still goes on today in our crowded, fragile world. Worse, the steel-jawed devices and wire neck-snares that trappers still use can be hidden on our public lands, including national forests, Bureau of Land Management and state trust lands, where they may harm hikers, wildlife watchers and others. Trappers seek to profit from the capture and killing of the public’s wildlife—animals like bobcats, foxes, coyotes and badgers—by selling their pelts into the international market. But, every year in New Mexico, traps also slam shut on unintended victims: dogs walking with their people, birds like ravens and even endangered species like the Mexican wolf. 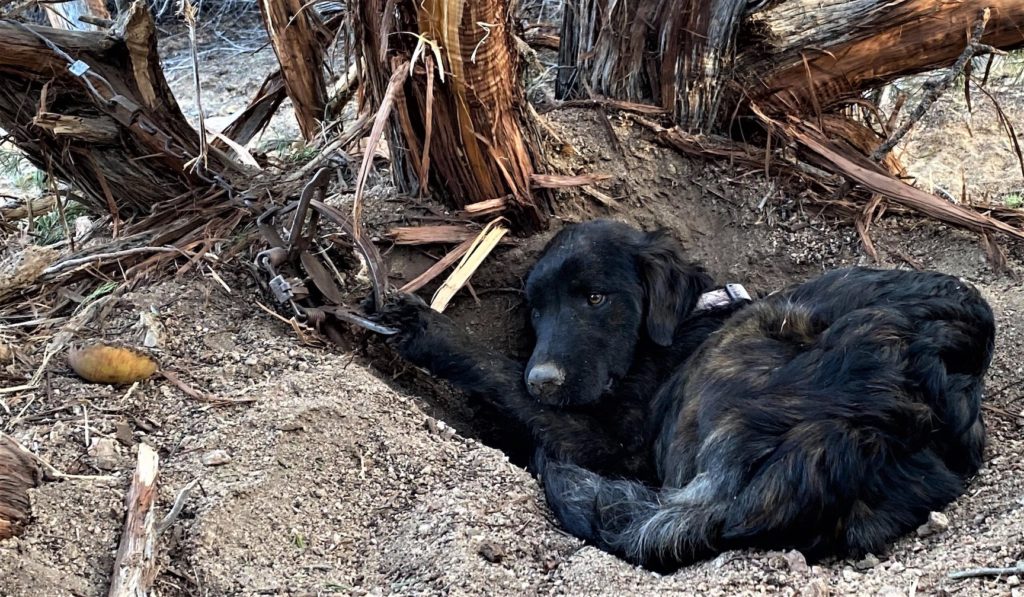 So far in only the four weeks that the trapping season has been open in New Mexico this year, three dogs have been ensnared. And those are only the incidents we at TrapFree New Mexico know about. There is no database or official place to report these traumas, so the actual figure is likely much higher.

Sometimes the owners can act quickly and are able to extricate their dog with a minimum of injury, which almost always involves the dog’s screaming in pain, swelling where the trap landed and biting of the rescuers. On Thanksgiving Day, when a hiker’s highly trained search-and-rescue dog was trapped near Jemez Springs, people got her out with difficulty, but after only a short time. Thankfully, the incident occurred on a walk for pleasure, not a search mission.

The weekend before that, hikers stumbled upon a dog that did not belong to them, languishing in a steel leg-trap in northern Santa Fe County. The only way they could tell the dog was still alive was that she blinked when they approached. They were unable to remove the trap and, after giving the animal water and turkey jerky, had to leave it alone overnight before they could get help. Imagine the torment of having to walk away from an animal in agony. 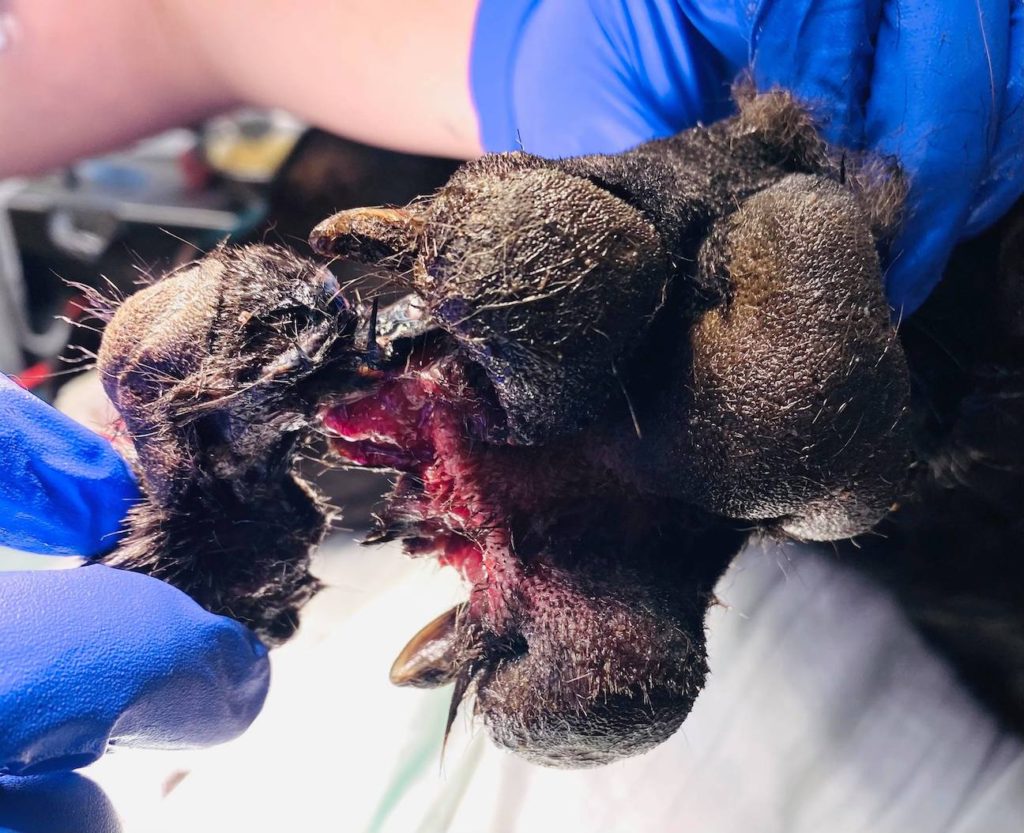 At first light the next morning, a NMDog rescue party made the two-hour hike back to the dog, expecting the worst. Miraculously Mahlia was still alive. She’s going to be okay after several thousand dollars in veterinary expenses that included surgery to amputate the destroyed part of her foot. The trapper is not required to pay these expenses.

In the case of wire neck-snares, the outcome can be much more tragic. In 2018, a hiker held his ensnared dog, Roxy, while she suffocated to death in his arms. He was unable to figure out how to work the release mechanism of the wire crushing her windpipe in time to save her.

That year, a bill was introduced at the state legislature that prohibited the setting of traps and poisons on New Mexico public lands. The bill was fittingly named “Roxy’s law.” It passed both of its House of Representative committees, but did not make it to the floor before the session expired. Similar legislation had been introduced three times previously, but had never progressed even that far.

Surely the time has come to end the awful carnage traps inflict, not just on companion animals, but also on our native wildlife. Despite repeatedly asking the New Mexico State Game Commission to better regulate traps, this past year the commission adopted only an incremental change that increased the distance where a trap can be set near an official trailhead or campground to one half-mile. Traps can still be placed a mere 25 yards from an official trail or road. User-created roads or wildlife trails don’t meet the definition for even that modest restriction.

There are still no bag limits on any “furbearing” species. Trappers can kill an unlimited number of bobcats or foxes or coyotes. This is why a hiker in Doña Ana County was horrified to come across dozens of skinned and dumped coyote carcasses the Friday before Thanksgiving. It looked like a scene from a horror movie. Trapping dismisses the importance these animals have in nature in maintaining the balance of the food web. The attitude that they are expendable is ignorant and arrogant. 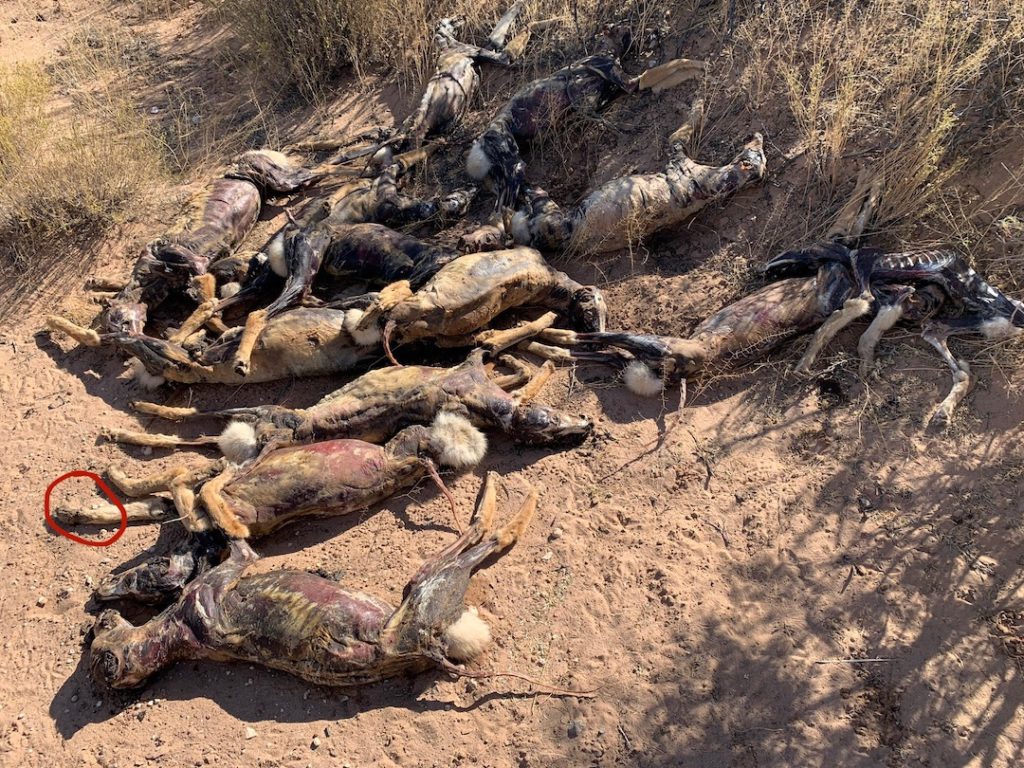 Our neighboring state of Arizona passed a measure banning traps and poisons on public lands more than 25 years ago. Colorado to our north adopted a complete statewide ban on these devices a couple of years later. Statewide bans also exist in California and Washington state and a few states in the East. New Mexico depends on tourism revenue, and we are at a distinct disadvantage when we place visitors wishing to explore the Land of Enchantment in harm’s way. Especially now during the pandemic, when being outdoors is one of the safest forms of recreation still available to us, the continuing assault caused by hidden traps is unforgivable.

The legislature meets again in January. Will this be the year our public lands become trap free? You can help to make that happen. Please visit trapfreenm.org to learn more, sign our  petition and contact your state senator and representative. (You can find their names and contact information at www.nmlegis.gov.) Ask them to support Roxy’s law. A hike on our public lands should not end in trauma or tragedy. The animal species that “bear fur” have value to nature far and above their pelt price.

Read the Guest Column in the Sierra County Sun »