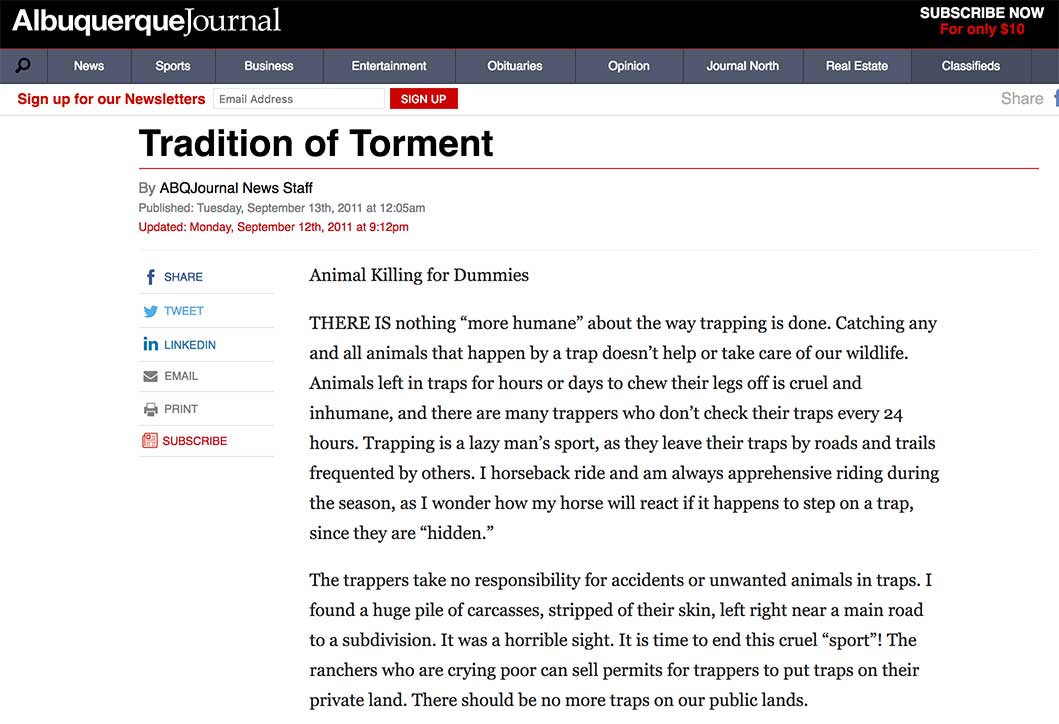 These letters appeared in the Albuquerque Journal on September 13, 2011

THERE IS nothing “more humane” about the way trapping is done. Catching any and all animals that happen by a trap doesn’t help or take care of our wildlife. Animals left in traps for hours or days to chew their legs off is cruel and inhumane, and there are many trappers who don’t check their traps every 24 hours. Trapping is a lazy man’s sport, as they leave their traps by roads and trails frequented by others. I horseback ride and am always apprehensive riding during the season, as I wonder how my horse will react if it happens to step on a trap, since they are “hidden.”

The trappers take no responsibility for accidents or unwanted animals in traps. I found a huge pile of carcasses, stripped of their skin, left right near a main road to a subdivision. It was a horrible sight. It is time to end this cruel “sport”! The ranchers who are crying poor can sell permits for trappers to put traps on their private land. There should be no more traps on our public lands.

RE: TRAPPING wildlife in New Mexico. I believe all trapping should be banned. To subject any animal to severe pain that may last for hours, only to be approached by the human that means certain death, appears to me as absolutely cruel and completely lacking of empathy for another living, feeling creature. What are we teaching our children by this flagrant use of cruelty?

We must remember that how we treat animals is a reflection of how we treat our fellow human beings. Humans must learn that all living creatures are deserving of respect and being treated kindly, even in death, even when that animal will be used to sustain human life.

Eighty countries have already banned trapping as inhumane. Let us have New Mexico be a model state for humane treatment of all.

Human Nature at Its Lowest

IT IS DISTURBING that trapping is permitted on public land and especially in our treasured Sandia Mountains in either wilderness areas or on adjoining federal forest lands. Unless an animal dies of starvation or thirst, it must suffer perhaps days before the trapper comes by. Then, in an area where firearms are not permitted, the poor critter must be beaten to death. And one could imagine the public outcry if a domestic animal, such as a dog or cat, had to suffer the same fate. It is wrong to permit wild animals, or any animal, for that matter, to suffer in foot traps, and it is wrong to permit them to be beaten to death.

We should be reminded that the Wilderness Act of 1964 (Pub.L. 88-577) includes a statement that, “A wilderness … is hereby recognized as an area where the earth and community of life are untrammeled by man, where man himself is a visitor who does not remain.” “Untrammeled” means “the forces of nature operate unrestrained and unaltered.”

In New Mexico the trapper, contrary to the Wilderness Act, is permitted to act unrestrained and to alter the forces of nature by random killing of wildlife.

MY PARTNER freed a young bobcat caught in a trap. Here is his story: “I came across it in the bush. It had a back leg caught in a claw trap. I could only imagine how it was suffering. It was torturing itself trying to get away. I know that some actually chew off their own leg in attempt to get out of the trap. Of course it would not let me get near it. I returned home and got a metal milk crate and when I got back, I lifted it over my head and ran toward the cat roaring. The cat recoiled and crouched down. In one motion I ran at the cat and put the crate over it. The leg caught in the trap remained outside. I opened the trap. I turned the crate on its side and ran away, expecting the cat to run … but it didn’t. It backed into the crate trying to find safety. So I walked away and returned for my crate another day.”

If people want to make a living off the lives of other animals, they should hunt them. But to capture them first in this way is pretty bad sportsmanship! In fact it’s not sportsmanship at all. Why would anyone choose to torture a living being like this?

Must Families Live in Fear?

WE USED TO live in the little northern town of Vallecitos. We often hiked across N.M. 14 into the national forest with our children and our dogs. On one occasion one of the dogs wandered off. We heard her crying, then suddenly she stopped. We could not find her. I sent our other dogs off to locate her. She was caught in a leg trap and apparently had given up hope of being rescued. As my husband knelt down and put his hand on the ground as he tried to release her, another trap just inches from the one holding our dog went off. My husband managed to pull his hand away fast enough to avoid getting caught too, but it was a scary experience. We rescued our dog and brought her home and attended to her injuries. Eventually she recovered, but never after that did we feel free to walk across the road into the national forest with our kids and dogs where just yards from the path such a lethal trap could be placed.

I FEEL COMPELLED to comment on the recent (story) titled “Trapping: More a Way of Life Than a Sport.” Our land borders the Gila National Forest, and I can attest to the extreme cruelty and harm trapping causes to our native wildlife, as we often see crippled animals that have been injured or even lost a leg in a trap. We once found a dead fawn in a trap that obviously the trapper had never bothered to check.

Trappers say their traps are “humane,” but there is no truth in this. Any animal will desperately struggle to free itself from a trap, even chewing off its own leg to do so, as has been documented many times.

Trapping may have been a legitimate practice in pioneer times, but today it is nothing more than legalized cruelty to animals. We no longer need furs to keep warm, and the skinned bodies of the coyotes, bobcats and foxes are thrown away.

… Arizona, Colorado and California (and) other states have recognized (leghold) trapping is barbaric and destructive to their wildlife and have outlawed (or restricted) it. It is time New Mexico joins them. …

A Blight on the Human Race

TRAPPING WAGES war on wildlife and endangers the general public. Concealed steel-jawed traps in New Mexico kill and maim thousands of animals every year, including endangered Mexican wolves. Trapping is inherently destructive and extremely cruel. There’s no humane method of killing a fierce predator like a bobcat. Watching trappers partake in their “sport” of strangling and crushing wild animals makes reasonable people sick at heart. There’s not much to celebrate in this tradition of cruelty and abuse. … If you want to enjoy the outdoors, camping, hiking, bird and wildlife watching are deeply engaging, safe and nondestructive uses of wilderness.

1. Appreciate the fall color — hike, bike, drive, camp — it will be glorious.

2. Be stunned as you watch a hawk soar in the wind above the foothills.

3. Hike late in the evening, relaxing your soul as the sun goes down.

4. Bike any one of our trails to increase your heart rate and excitement factor.

5. Paddle one of our many lakes in a kayak or raft the rivers.

6. Wake early in the morning to experience the cranes heading south.

7. Wander the Valles Caldera to be a guest of the large mammals in their home.

8. Express yourself in the sands of White Sands.

9. Be a caveman for a day in Carlsbad.

10. Wander through any one of our areas of “enchantment” viewing, not killing, the wildlife in their habitats.

Take some time to cultivate your relationship with the planet. Understand you are not separate from living creatures but rather see yourself in them as we all share the same originating spirit.